Case: You’re happy enough with the frame-by-frame predictions but you need to correct the identities tracked across frames.

The basics of Track proofreading are covered in the Tutorial. You should go read that if you haven’t already. Here we’ll go into more details.

The process of predicting instances frame-by-frame and the process of putting these together into tracks (i.e., identities across frames) are distinct, although it’s common to run them together during the inference pipeline. Obviously you can only track identities after you’ve predicted instances, but once you have predictions, it’s easy to then run tracking by itself to try out different methods and parameters.

If you’re getting poor results, you may want to try out different methods and parameters. Changing the track window and the similarity method—both explained below—can make a big difference.

The tracker will go through the predictions frame by frame and try to match instances on frame N to candidates which already have track identities assigned. These candidates are generated from a certain number of frames immediately prior to frame N (what we refer to as the “tracking window”).

There are currently three methods for matching instances in frame N against these candidates, each encoded by a cost function:

Once SLEAP has measured the similarity between all the candidates and the instances in frame N, you need to choose a way to pair them up. You can do this either by picking the best match, and the picking the best remaining match for each remaining instance in turn—this is “greedy” matching—or you can find the way of matching identities which minimizes the total cost (or: maximizes the total similarity)—this is “Hungarian” matching.

Finally, you have an optional second-pass method which “cleans” the resulting identities with “Cull to Target Instance Count”. To use this method, you specify a target number of tracks by setting the “Target Number of Instances Per Frame” (i.e., how many animals there are in your video). SLEAP then goes frame by frame and removes (or culls) instances over this target number. To cull to a target number of instances per frame, navigate to the Inference Pipeline via Predict >> Inference, then:

Often your models will fail to predict all of the instances on all of the frames. Even if you’re happy enough with the result since you can interpolate missing data, it’s possible that the missing instances will cause problems when we try to determine track identities across frames, so if your tracking results are poor, you may wish to Importing predictions for labeling.

There’s an experimental command-line utility which tries to match up lost identities. You need to give it a predictions file which already has track assignments, and specify how many instances there should be. It looks for frames where there’s exactly one lost identity and exactly one newly spawned identity, and it joins these into a single track. Suppose you have a predictions file at path/to/predictions.h5 and you want to end up with three distinct tracks. You can run

This will result in a new file at path/to/predictions.cleaned.h5. This file has the same format as the SLEAP labels and predictions files.

When you’re proofreading track identities, the first step should always be to enable “Color Predicted Instances” in the View menu. Choosing the right color palette can also make a difference. If there are a small number of instances you’re tracking, the “five+” palette will make it easier to see instances which were assigned to later tracks, both in on the video frame: 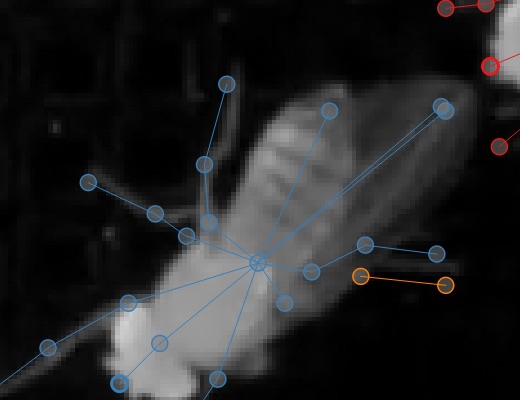 Sometimes the background in the video will make it hard to see certain colors in a palette. It’s possible to edit palettes, as explained in the View menu section of the GUI.

As discussed in the Track proofreading section of the Tutorial, there are two main types of mistakes made by the tracking code: lost identities and mistaken identities.

Lost Identities: The code may fail to identity an instance in one frame with any instances from previous frames.

Here’s a strategy that works well for fixing lost identities: 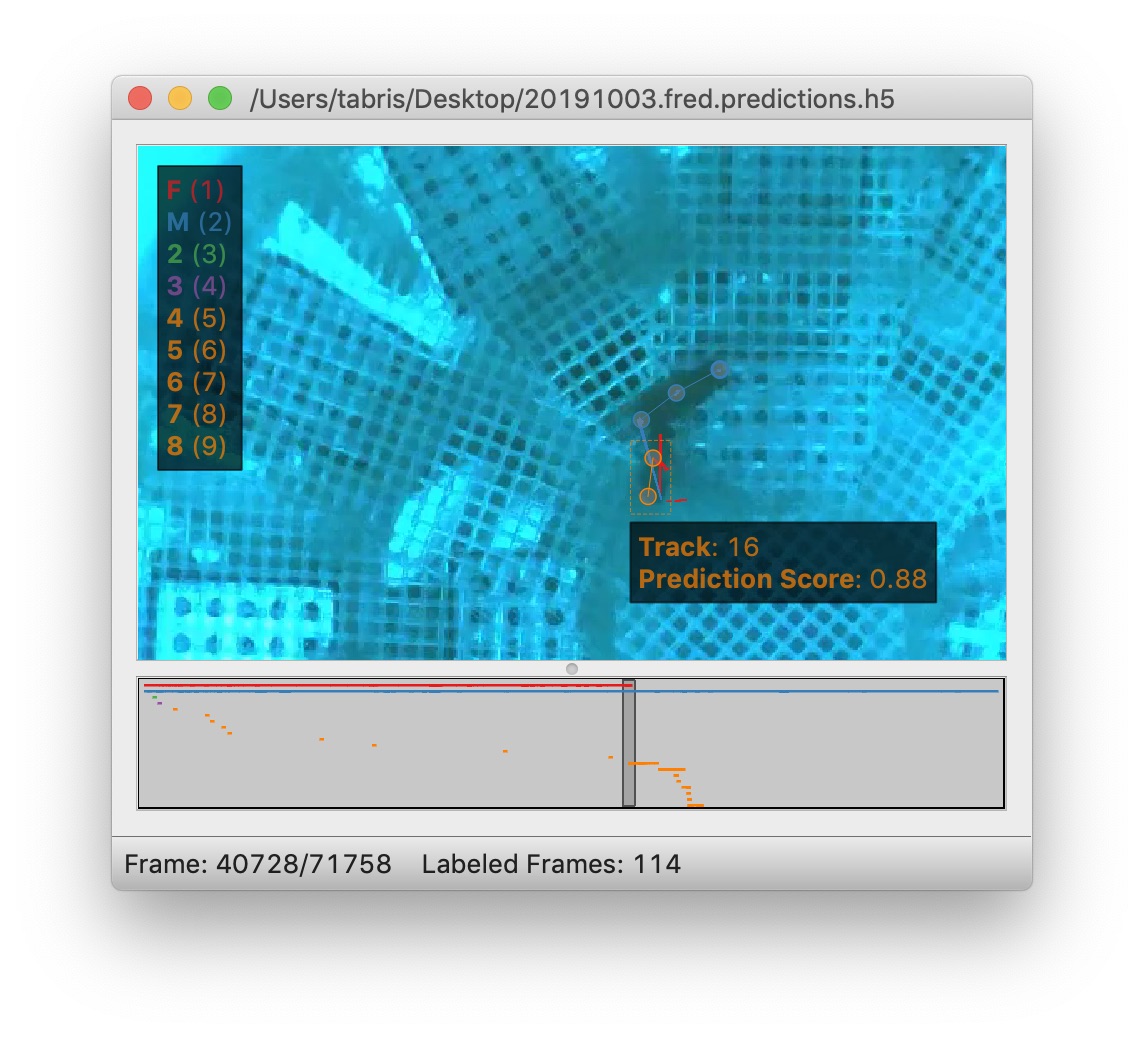 Mistaken Identities: The code may misidentify which instance goes in which track.

Mistaken identities are harder to correct since there’s no certain way to find them—if we knew where they were, then we wouldn’t have gotten them wrong in the first place. But there are some strategies to make it easier to locate them in your predictions.

One strategy is to set the trail length to a number greater than 0 (e.g. 50) and jump through the predictions using the frame next large step hotkey. It’s usually possible to see identity swaps by looking at the shape of the track trails, as here: 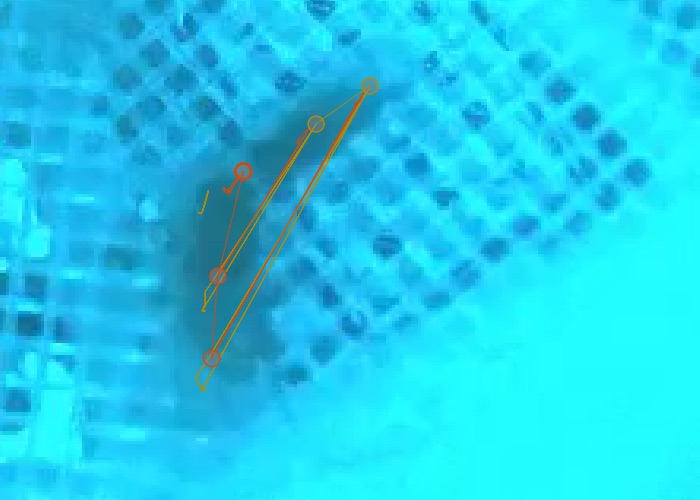 The downside of this method is that when you find the set of frames which contain a swap, you’ll then have to go through the frames individually to find exactly where the swap occurs. (You may want to turn off trails while doing this, since they can make it harder to see where the instances are in the current frame, and they also make it slower to move between frames.)

Another strategy is to generate velocity-based frame suggestions: 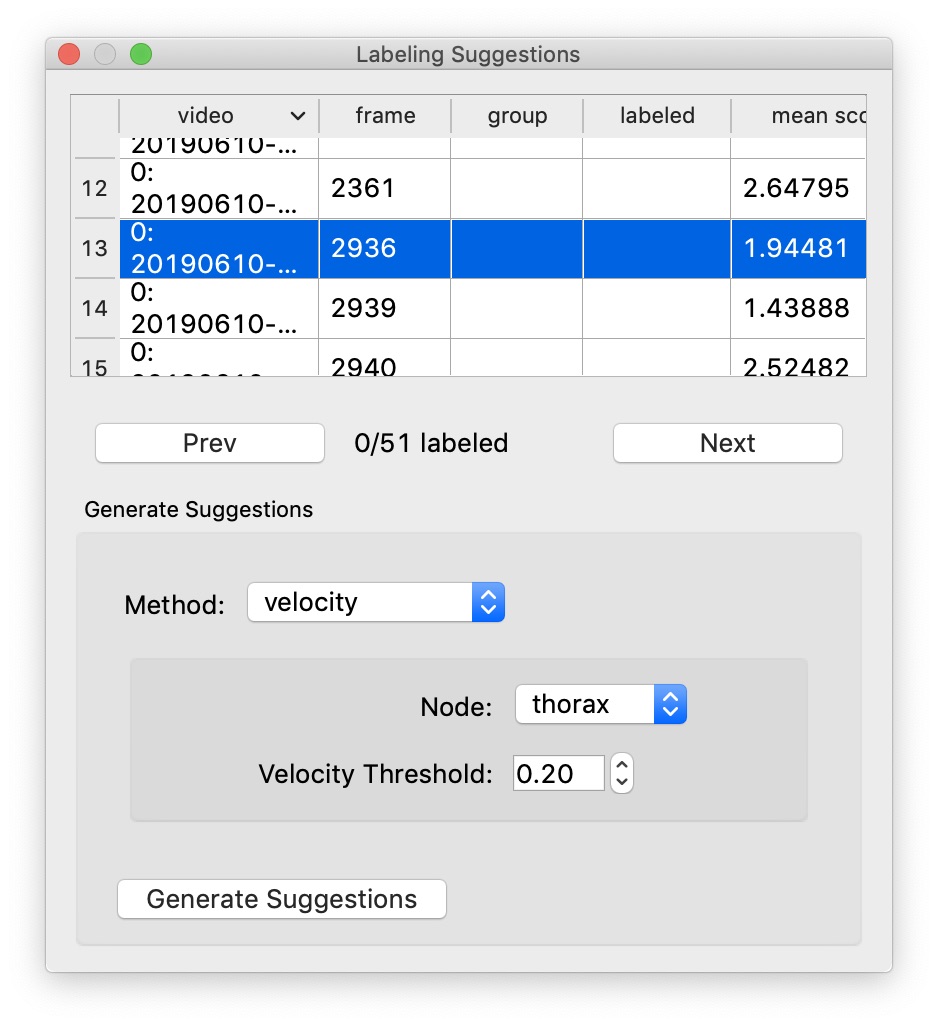 In the “Labeling Suggestions” panel, choose the “velocity” method. You should select a node with a relatively stable position relative to the position of the body (i.e., not an appendage), and start with the default threshold.

If there are far too many frame suggestions, then make the threshold higher. If there aren’t very many, you might try lowering the threshold (or this may indicate that this method won’t work well for this file).

Once you’re happy with the number of suggested frames, you can step between these (using the “Next Suggestion” hotkey in the “Go” menu) and quickly review whether this is in fact a swap by looking at the track trails or reviewing adjacent frames. If you’ve found a swap, either use the keyboard shortcut for the “Transpose Instance Tracks” hotkey in the “Labels” menu, or select one of the swapped instances and use Show tracks legend hotkey plus a number key, just like you do for fixing lost identities (as explained above).

You can optionally select “Propagate Track Labels”. This means that switching the tracks in one frame will also be applied in all subsequent frames. 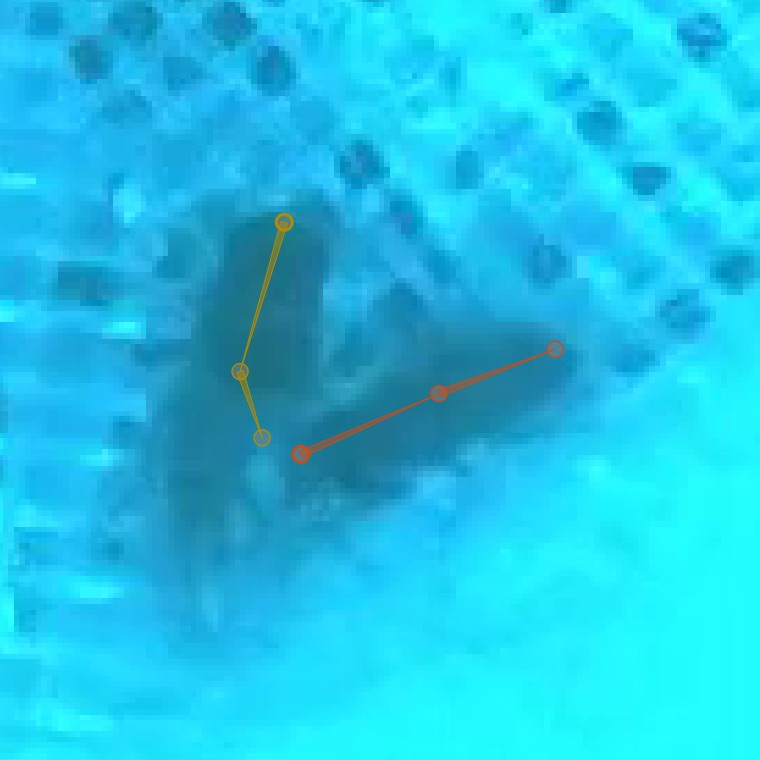 The wedges point from each source node to its destination node(s) in your skeleton. You can set the edge style using the “Edge Style” submenu in the “View” menu.